Taking screenshots on a Mac computer is easy and you can also save them without any issues. However, it is possible to accidentally delete them and when this happens; there is the tendency to panic, especially if they are important files. You don’t have to fret though. You can easily recover deleted screenshots Mac, without much stress. In this post, we will look at how to take screenshots on a Mac and also how to recover the files if you mistakenly delete them.

Part 1. How to Take Screenshots on Mac

Part 1. How to Take Screenshots on Mac

There are different ways to take screenshots on Mac. You can capture the whole screen, a small portion of the screen, and a window. In this part, we will look at how to screenshot using a Mac.

To capture the entire screen, follow the simple steps below:

Press and hold the ‘Shift’ ‘Command’ and ‘3’ keys simultaneously. This will take a screenshot of your screen. The screenshot will be saved to your desktop.

If you want to edit the screenshot, look out for the thumbnail at the corner of your Mac screen and click to edit. You can also edit it after it has been saved on your desktop.

If you want to take a screenshot of a portion of your screen, follow the steps below:

Another option of how to take a screenshot on a Mac is to follow the steps below:

Click to open the menu or window that you want to take a screenshot of.

Press and hold ‘Shift’ ‘Command’ ‘4’ and ‘Space Bar’. This will change the pointer to a camera icon.

To edit, check the thumbnail at the corner of your screen or wait until the screenshot gets saved to your desktop before you edit.

Almost everyone has at one time or the other accidentally deleted an important file before. If you have deleted some screenshots on your Mac PC, you don’t have to worry. When data is deleted, it doesn’t go away and there are many ways you can recover them. In this part, we will share three methods of how to recover deleted screenshots on Mac.

When you mistakenly deleted pictures or photos on a Mac PC, you can easily recover them through the ‘Recently Deleted’ Album option. To do this, follow the steps below:

Step 2: From the left column, select ‘Albums’ and double-click on ‘Recently Deleted’.

Step 3: You will see the thumbnails of videos and photos that you have deleted with the details of how long before they get permanently deleted. Select the specific screenshot you want to recover.

Step 4: Click the ‘Recover’ button at the top right. Return to the original Photo Album folder to see that the screenshots have been recovered.

You can also recover Screenshots on Mac when they have been moved from the desktop or hard drive to the recycle bin. You can easily undo the delete and restore the deleted screenshots directly from the recycle bin folder. To do this, follow the simple steps below:

Step 1: Click to open the ‘Trash’ icon on your Mac’s desktop. From here, you will all your deleted files and screenshots.

Step 2: Locate the images you want to restore and drag them from the trash to the desktop. You can also right-click on the images and select ‘Put Back’ to recover deleted screenshots on Mac from the trash. 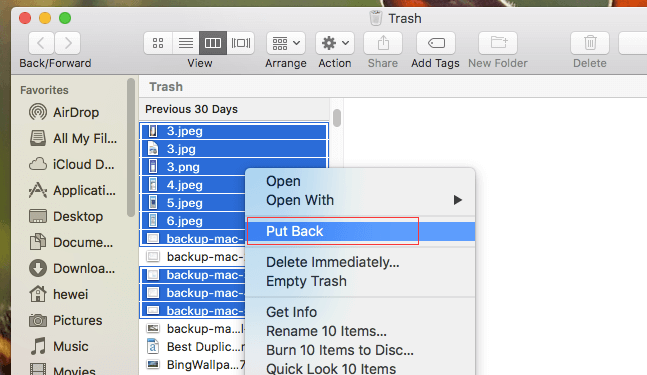 How to Recover Screenshots on Mac with iBeesoft

Step 4: Preview the files and recover them on your Mac PC. It may take a few minutes to scan for the deleted files, especially if they are large files. When the scanning process is complete, click ‘Recover’ to recover permanently deleted screenshots on Mac.

This article has enumerated the three different methods on how to recover screenshots on Mac. If the files have been permanently deleted, the only way to get back them is to use a professional Apple data recovery software. iBeesoft is the most recommended option that seamlessly recovers your deleted files within minutes and without any stress.